Even the robin's flight south was cancelled

I was walking Fergus down the road the other day when he stopped and stared up at a tree. I followed his line of sight up to one of the fattest robins I have ever seen. Even the dog seemed to think it strange to see a robin here in January. Worms are frozen this time of year, yes? I look forward to seeing the first robin every spring, as a harbinger of warm weather and the end to winter. Don’t tell me we have totally messed up bird nature with climate change too.

I’ve seen other people in Eastern Ontario posting photos of robin sightings online. Apparently there are quite a few of them that decided to stay for the winter. Someone even caught a picture of a robin fishing in the open river for a minnow. I did some research and this is what I found out.

Robins are nomadic, so while they may have left your property, they may not have flown south. In the colder month their diet has to change, so they will relocate to a place where they can find berries or fallen apples. And they aren’t actually fat – the bird I saw was likely doing something called “rousing” – a fluffing of the feathers for optimal warmth. Robins have more than one layer of feathers, so they can trap warm air next to the body, to stay dry and warm in winter.

According to most online sources, there isn’t much you can do to help robins in winter. If food becomes scarce, they will simply move on. They won’t eat from your birdfeeder because they have learned that food is found in shrubs or on the ground. You might try leaving out some suet, berries, raisins or chopped apples. But they are pretty good at fending for themselves.

Someone else suggested a warm bird bath might be helpful, because the robin spends most of its energy in winter shivering to stay warm. If it had warm water to drink, this might help.

I don’t know who to believe with this conflicting information, so I’ve got all bases covered. I’ve put out some suet and berries, and my warm water bird bath should be here next week. I just hope it doesn’t attract every member of the winter animal kingdom. I don’t want to look out the kitchen window and see a coyote out there enjoying the spa.

The main cohort of robins is expected to return right on schedule in spring when the ground melts and worms can be found again. That’s one mystery solved. Now what about that huge murder of crows? 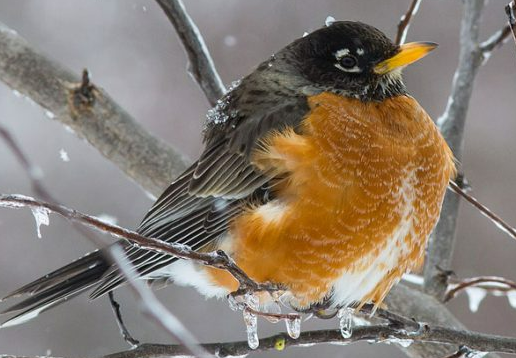 Posted by Diana Leeson Fisher at 10:52 AM