It's hot. Find your spot. 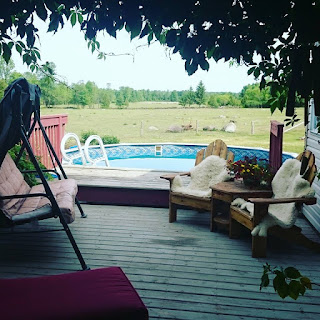 I love this time of year when the leaves are popping out on the Virginia Creeper that I transplanted to the back porch. The Farmer built a trellis roof, much like they have in wine country. Soon we will have a living roof to shade and cool us.

A robin built her nest on the top of a post at the edge of our porch. The leaves of the vine have now sprung up to completely shield her brood from view. Two barn swallows sit on the knobby bits of the vine, watching for June bugs. They eat mosquitoes, too. They may be building a muddy nest atop the porch light but, as far as I’m concerned, they can stay as long as they like. They are earning their keep.

The vine also grows thick around, over and through the old log barn at the edge of the property. When you step inside the structure, the thickness of the logs and the vine insulation drop the internal temperature by at least ten degrees as compared to what is happening outside. Maybe this is what made one of our cows (Ginger) decide to force her way in through the single door one hot June day.
I was doing my morning rounds when I noticed a rather large cinnamon-coloured behind wedged in the entrance to the tiny building. Upon inspection, I could tell the cow had gotten herself firmly stuck.

She just turned her head slowly round to peer at me, completely nonplussed over her situation. I put my shoulder against her rump and gave her a hearty shove. The logs gave an inch and in she went. She happily took up the tiny pen, rearranged herself and continued to chew her cud, looking at me.

“I suppose you want to stay in here? I’m going to tell the Farmer what you have done to his barn.”

The tiny feeding trough between the two little pens had been shattered by the cow’s bulk as she forced her way inside. My husband started the tractor and brought a big, fermented hay bale outside where the cow could smell it, and waited until Ginger squeezed her way back out of the building. The walls strained under her effort. Once she was out, he nailed a big board across the door.

The next day, which was even hotter and muggier, Ginger was back inside the log barn. She watched us through the tiny window as we approached.

“Well, it looks like she has found a place to get away from the bugs,” the Farmer decided.

Ginger was allowed to stay in the log barn. Like some sort of bovine fairytale princess, she had found her own little cabin in the woods to escape from the blackflies, mosquitoes, wasps and June bugs. I guess I’m lucky she didn’t try to get up on my shaded back porch.


Posted by Diana Leeson Fisher at 7:58 AM 0 comments