Seeing the first snow through an International student's eyes

My International student from had been taking pictures of frost cover all week. I kept telling her, “that’s not real snow.” I knew she would be excited to see an actual snowfall. “One day you’ll wake up and it will just be all white outside,” I told her. “It’s beautiful. I still get excited at the first snowfall, every year.” Sunday, and Vicky got to try out their new winter wear.
It was quite fun to watch. First, they opened the front door and just squealed as a gust of wind blew snowflakes in their faces.
“Ok, guys. We like to keep the snow outside if we can,” and I pushed them gently out the door, to more squeals. They carefully slid their feet over the slippery porch and I ran to get my camera.
, from near in has seen snow before, “but never this big!” We had about 2 cms on the ground. I told her she ain’t seen nothin’ yet.
, who lives near the beach in , had never seen a snowflake. She just stood there for a while, watching each beautiful, fat flake land and melt on her black gloves. I think she had tears in her eyes. I was reminded of my daughters as babies, seeing snow for the first time.
It must be like when we ‘Southerners’ head north to experience aurora borealis. Or the first time we see an ocean with no visible limit. For , feeling the snow fall on her face was like rounding a corner in and being faced with the for the first time.
“Do you hear it crunching under your feet?” I demonstrated by stomping around. “That means it’s good for making a snowman.”
Beach girl picked up a handful of snow, formed it into a perfect snowball and whipped it at . Vicky responded by throwing a handful of snow at . It all blew back in her face.
For the next twenty minutes the girls worked together to make a snowman that was about a foot tall. I think I’ll make them a life-sized one to greet them when they return from school on Monday.
I dragged the Christmas lights outside and proceeded to put them on the tree. The Farmer suffers from vertigo when at the top of a ladder so I get to do this job myself every year. I rigged up an extendable pole with a hook on the end but I still couldn’t reach the top of the evergreen I had decorated last year. Could it really have grown three feet in one year?
I decided to light the cedar shrub instead. This turned out to be not a great idea, as it was already circled with wild grapevine that gripped my hook pole and light string at every opportunity. I lost the business end of my implement in the tree, nearly fell off my ladder tugging on the string and had the branch whip back in my face, getting snow in my eyes.
The girls watched with concern from the window in the house, where they had retreated to warm up by the fire.
An hour later I had succeeded in throwing all ten light strings up onto the twenty-foot cedar tree. The vines held them in place. It was a group effort. It doesn’t look pretty, but as the saying goes, a man on a galloping horse wouldn’t tell the difference. Especially if he’s riding after dark.
When I returned inside to take a layer off, having worked up a bit of sweat, I found the girls still sitting on the couch by the fire, in full winter gear. Hoo boy.
Maybe it’s more like the opposite of us going to the desert for the first time, in +50 degrees Celsius. Because these two are acting like it’s forty below when it’s plus 2.
is here until mid-January. Hopefully we won’t get minus 30 until she is gone home to the beach. , however, is going to get to wear her Ugg boots and high-fashion parka a little more than that. She is here ‘til the bitter end and other than a break at Christmas, she doesn’t go home to until June. Oh ! 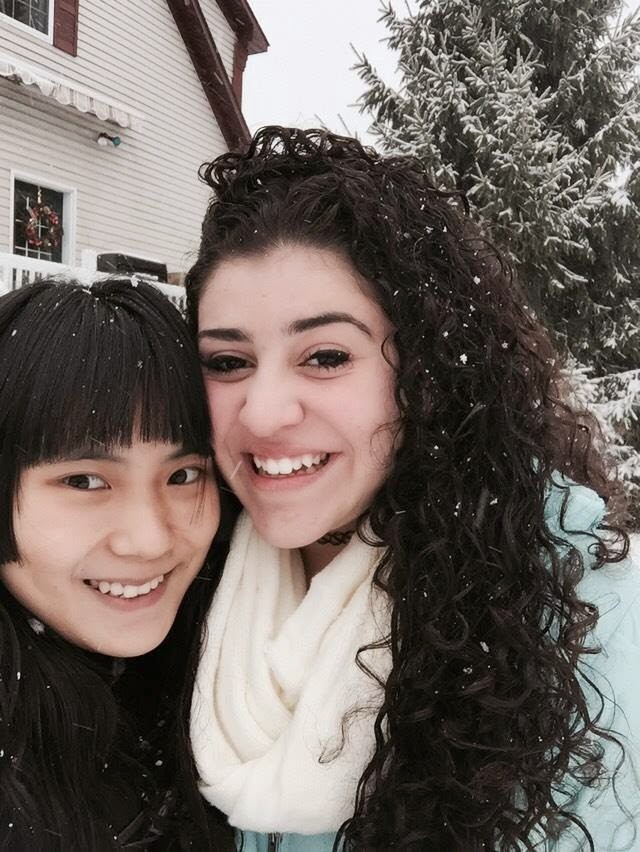 Posted by Diana Leeson Fisher at 5:40 AM 0 comments

As I walked around the block this morning I noticed them hanging from trees, mailboxes, and farm gates. I also noticed them in the department store, shop windows and restaurants. The municipality is flying theirs at half mast. Canadian flags. It’s Canada Day again.
The events of Wednesday, October 22nd in were heard around the world. One man was shot and killed in the line of duty, and then the shooter threatened our national headquarters. Our sacred Parliament buildings.
We have learned a senior security agent – Sergeant-at-Arms Kevin Vickers – ran toward the gunfire exchange he heard in the front hall of Centre Block. He chased the shooter to where he hid behind a stone pillar and then Vickers, who is not a young man, hit the marble floor, rolling over onto his back as he spun and slid around the pillar to land at the feet of the shooter. Then, with several quick shots, he took the killer down. Vickers was given a hero’s thank you in the House of Commons the next day with a prolonged, loud standing ovation and speeches from our leaders. Many are asking for recognition of his heroic efforts on a grand scale.
Others are asking that a fund be established in honour of Corporal Nathan Cirillo, so his son will always know how grateful his country is for his service. Just two days after the shooting that fund had already reached $300,000. When it reaches $500k, it will be split between the familes of Nathan Cirillo and Patricen Vincent, the Warrant Officer run down in October 20th.
As I write this, Cpl. Cirillo hasn’t been buried yet. But he has come home.
We first heard that the fallen soldier’s hearse would be escorted along the Highway of Heroes – the designated route between and that far too many have taken when they return from overseas. But Cirillo wasn’t flying home to ; he was in . Realizing his route would be along Hunt Club and the 416, an approximate schedule was released and people by the hundreds lined the roadways to wait and watch him pass.
It was a P.D. day in our area so many students also had the opportunity to witness and take part in the solemn moment. Parents tried to find ways to explain what happened, and why we are all so affected by it.
Here’s what I think, for what it’s worth. I hope that parents will find a way to explain the events of October 22nd to their children, themselves and each other, that does not involve reference to any religion, race or culture. Responsible journalists do not attribute these crimes, both the killing Oct. 20th of Warrant Officer Patrice Vincent in and the murder of Corporal Nathan Cirillo at the National War Memorial downtown , to any religion, race or culture.
In both cases, the killers had a history of mental health problems. Mental illness took the lives of four people: the two victims and the two men that killed them.
While we are busy claiming attacks on our service men and Parliament are attributed to a particular religion, race or culture, and putting millions of dollars toward fighting that war, I hope that someone up there in the upper echelon of government sees fit to also invest some funding in mental health research, awareness, treatment and care.
In the meantime, let us look at the good that came out of the bad. Because there is always something. This week many in downtown , in the line of fire and under lockdown, have a newfound respect for our service men and women, our police officers and security personnel. Those who ran toward danger while ushering others swiftly to safety. We are waving the Canadian flag and wearing our national pride in a bright, bold shade of red. And we stood together, no matter what our race, religion or culture, in person and in front of television sets and online, to watch one young man make his final trip home, to Hamilton, along an extended Highway of Heroes.
If you are among those who think our displays of patriotism are of little effect, think again.
Why did we unfurl our flags on the highway overpasses from Hunt Club to the 401? Cpl. Cirillo’s family appreciate the outpouring of support. But we also did it for ourselves. It was a way to make sense and find closure after a traumatic event that shook all of us. 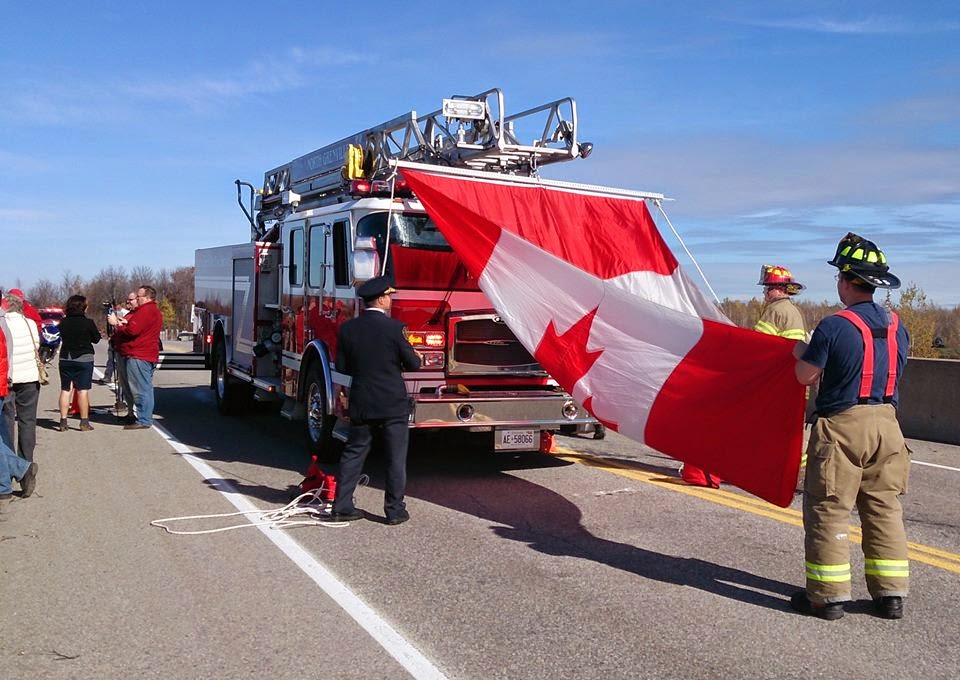 Posted by Diana Leeson Fisher at 8:36 AM 0 comments