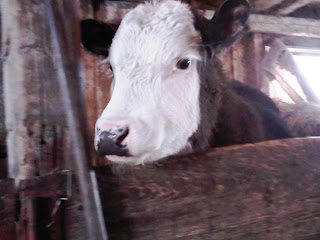 For those who asked, the calf is doing fine, thank you. :)

I sometimes forget that I need to provide updates to loyal readers after telling a story about one of my animals that is struggling. Well, for those who have stopped me in the street to ask, the calf is doing fine, thank you.

Baby is off the milk bottleswe weaned him after 8 weeks of age when he started to cut back his intake. He eats hay and sweet feed (corn, grain and molasses) with water all day long. He is no smaller than the calves that have been fed by their mothers since birth. I am very proud that he is as healthy as he is. I'm proud we were able to keep him alive. It's incredible that he's doing so well: during his first week of life he lay listless on the ground and I had to put my fingers in his mouth to try to get him to suck on the bottle. I didn't think he was going to make it.

This little bull calf stands, doesn't exactly come when he's called, but if he's busy eating and you start scratching his back or tickling him under the chin, he doesn't move away. He seems to love the attention. While the other calves get licked and nudged by their mothers, this calf is alone in a pen. We are the only physical contact he gets.

At least he has someone to communicate with during the day now. I'm sure he had visits from barn cats and squirrels before but now he actually has a friend in a neighbouring pen. The sheep who gave birth two weeks ago is in there with her little black-faced Suffolk lamb. Soon the calf will have so many roommates he may have to move out.

It's probably time. He can be weaned off the sweet feed soon, and live on fresh grass and dry hay, like all the other cows. He needs to go outside in the sunshine, to romp and play with the three other calves. I can't wait to see him running and jumping around with them. Besideswe need the room. In the next few weeks every spare pen will be occupied by our pregnant ewes. Most of them are just about ready to give birth.

Speaking of birth, I found one litter of kittens. I saw which corner of the barn the mothers came from when they heard cat food hitting the feeding bowl. I climbed up into the loft and listened quietly. A soft mewing was coming from under a board. I lifted it and there they were: two white, one dilute calico and one grey tabby. I think it's just one litter. The other one must be up there somewhere too. I will go back in daylight and investigate.

I have to put my hands on these kittens every day and make them tame so they are easier to adopt out when they are weaned. Then I have to trap their mothers and take them to be spayed.

We've just about got this feral cat population under control.

After lambing season, the next creatures to arrive on the farm are the chickens. We will raise them in a chicken coop area where they are safe but still able to wander around freely. We grow only happy chickens on this farm. Happy chickens that like to peck my ankles. I prefer turkeys. Turkeys approach you slowly, stand beside you and comment melodically on the proceedings, whether you are refilling their water tank, replenishing their food or adjusting the heat lamp. They never peck. And they have this amazing ability to communicate telepathically. You walk in to a quiet room of turkeys and suddenly, they all gobble the same phrase of syllables, at exactly the same time. It's quite a trick. I do enjoy the turkeys.

Soon the farm will be heavily populated with babies of all species: calves, kittens, lambs and chicks. Just as it should be, in springtime.

At this time of year, it's important to remember that animal shelters are bursting at the seams with unwanted kittens and other critters. Consider donating some pet food to help them in their efforts, and if you are in the market for a family pet, please consider giving one of them a forever home.

Tune in to The Big Breakfast with Drew and Diana on Kemptville's new radio station, STAR 97.5fm.
Posted by Diana Leeson Fisher at 5:57 PM 0 comments

Season of the kitten, once again.

Well, at least it isn't as bad as last year. We should only have two litters of kittens born this spring. Last year we had ten.

When the kittens just kept a comin', under every shelf, behind every hay bale and in every hay feeder last spring, I decided we had to take drastic measures to control the cat population on the Fisher farm.

Many farms just practice the survival-of-the-fittest rule for their feral barn cats. Every winter they lose a few of the less hearty cats to the cold, and to other common barn cat ailments. They feed minimal amounts of dry food, to encourage the cats to hunt rodents in the barn. If their cat population gets a little too healthy and prolific, they control it by culling some of the cats. It's definitely a controversial subject.

When I moved into the farm five years ago, the Farmer had about six cats, he figures. He put down one bowl of food a day and occasionally they would get table scraps for a treat. The first time I looked out the patio door and saw a tiny kitten sitting there, I was hooked.

The mother cat had fed her kittens in the hayloft for a few weeks, but when they were old enough to start wandering, she brought them up to the farmhouse. Perhaps she thought I would help her to care for them. She was right. Smart kitty cat.

I washed and medicated weepy, infected eyes. I took the worst cases to the vet, paying for medication and treatment, only to see these weak kittens succumb to their illnesses anyway. I mixed my own homeopathic medicines, bought quality cat food and provided them with a warm, dry place to sleep.

The next year we had ten cats. The third year we had twenty. The males came and went, after fighting for the leadership position, but the females stuck around. Last year all twelve females had litters. Forty kittens were born.

I put an ad on kijiji.com and over the next six months I adopted out thirty-seven kittens. Here's how I did it. The kittens that were born in the stable were easy to catch and handle every day, so they quickly became tame and easy to adopt out by the time they were eight weeks old. I soon learned what an eight week old barn cat looks like. It's typically smaller than a domestic cat. The 'extra wild' kittens had to be caught and wrapped tightly in a towel, or they would shred my arms with their tiny claws. I am scarred for life. Then I would take them in the house and down to the spare bedroom in the basement, which became a kitty nursery until they were tame and adopted. I handled them every day if possible, until they were ready to trust and accept being touched.

When Sheila, our self-proclaimed house cat, had kittens, she let some of the other kittens nurse from her too. She was a very helpful wet nurse. As her charges, biological and otherwise, were adopted out one by one, she would come and sit by my feet and complain loudly: "you give them to me, you make me feed them, then you take them away?!"

Now she has a collection of stuffed toys, all kitten-sized, that she carries around the house in her mouth. I spayed ten cats last year. I missed two. One went into hiding when she saw her friends being caught in the live trap and carted off, one by one. The other was caught in the cage, but when I opened it she darted out, climbed up my pantleg, jumped over my head and escaped out the open door. She freaked me out so much I decided not to try to catch her again last year.

The other day I went out to the barn and there were the two mamas that I missed last year, waddling around, hugely pregnant again. Now I have to find homes for two more litters.

And then I have to catch the mamas—perhaps the smartest mamas in the barn—and get them spayed. Does anyone want a kitten?

Listen to The Big Breakfast Show with Drew and Diana on Kemptville's new radio station, STAR 97.5fm.
Posted by Diana Leeson Fisher at 10:57 AM 1 comments