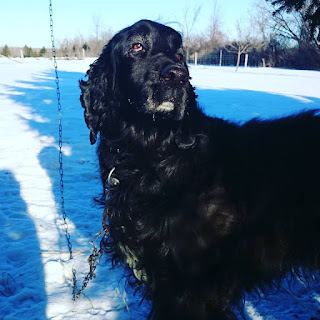 For two days I have had a migraine. I think it’s because my head has been wrung dry of any more tears. I have been crying at the slightest mention of my silly old geriatric dog Cody, who we had to put to sleep this week. He was in his 17th year.
We have been trying to make this decision for a while now, the Farmer and I. Cody the Wonder Dog has been starting to really show his age this past year. First he went stone deaf. Then his hind legs started to give out on him on his daily walk. Then the inevitable loss of control over his bodily functions. I think he started to lose his eyesight as well. The one thing our old Gordon Setter never lost was his appetite. Or his youthful spirit. We knew he was old, but he didn’t.
The Farmer adopted Cody about fifteen years ago. The two-year-old dog was rejected by an apartment-dweller who said he received a failing grade in obedience school. That I can believe. The only instruction Cody can follow is “sit.” I also wondered at someone who thought a Gordon Setter was a good choice for an apartment dog. He is quite large.
Cody has only two bad behaviours: he runs away whenever he sees the opportunity, and he has an insatiable appetite, unable to resist the temptation of unattended food. He once ate an entire boneless rib roast that I was defrosting for our Sunday dinner. He didn’t leave a trace. The only evidence was his burp.
Cody joined us in the house several times a day, where he would lie on his blanket in front of the TV, next to the fire. On extremely cold or stifling hot nights we would bring him upstairs to sleep beside our bed. But for the most part, he was an outdoor dog. When I first met Cody I thought it strange that he was always tied up. Surely he can be loose on the property, I thought. I thought wrong. The moment that dog was off his leash, he would bound down the road and into a neighbour’s yard or garage, to check out their garbage. Even when his legs no longer worked, his brain told him to RUN. He made it partway down the road and collapsed, rolling himself out of harm’s way into the ditch. He was brought home by a neighbour more than once. Covered in mud.
And so tied up he remained. Perhaps that is why he lived so long – because he couldn’t get into things that might otherwise hurt him. He had a pretty controlled environment.
You have to take stairs to get into our house, so eventually even that was a problem for dear old Codesville McCode. If ice coated the steps, he lost his confidence altogether and barked for us to help him in his soft little voice. He lost his loud bark months ago.
Finally we decided it was time. He had a good long life, we told ourselves. But still, it was very difficult. I took Cody’s photo one last time, kissed him on his forehead, wiped his rheumy eyes and said goodbye. The Farmer took him on his final trip to the vet.
When I got home that night, everything seemed so quiet. The usual black hairy mass emerging from the shadows to greet me was no longer there. I let myself into the house and gave the Farmer a hug. Silly old dog. We miss him so much.
Next, I had to tell the girls. I couldn’t do it over the phone, so I sent an email. There will be something missing from our family gathering this Sunday. It bops up and down on the porch in front of the kitchen window, ears flapping, barking silently, asking to be let in. To lie on the blanket in front of the fire, for as long as his heavy winter coat can stand. To be with his family. His people.
Thanks, Cody, for your years of service as our watchdog, our people-greeter, our entertainment and companion. Go now and run, puppy-brain. And eat all the dessert.

Order your copy of “The Accidental Farmwife” book at: dianafisher1@gmail.com 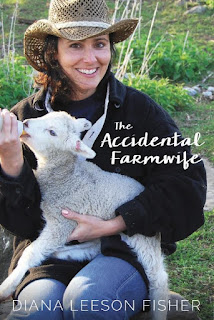 It's here, finally! I've had inquiries so I'm posting this general info. If you want a copy of "The Accidental Farmwife" (a compilation of my weekly columns over the past seven years) mailed to you, it's a total of $28.75 across Canada. That includes the book, the tax, the packaging and post. Just email me a money transfer at: dianafisher1@gmail.com, provide your mailing address and it's in the mail tomorrow. OR...for fans of the e-book, it's on Amazon at the end of the month! Thanks everyone for your interest and support! www.theaccidentalfarmwife.blogspot.com.
Posted by Diana Leeson Fisher at 11:27 AM 0 comments 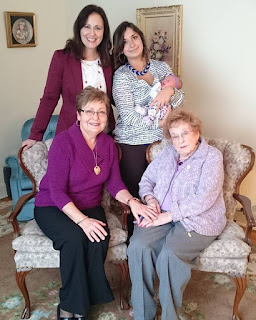 Think of how dependent we are upon technology. And then think of where you would rather not be, when the power goes out. Most places have generator back-up power but what if, for example, you were up on the highest point of a chair lift, suspended over a deep valley in the mountains? Yikes. I would not do well with that one. That was the first thing that popped into my head when the power went out at Walmart on Saturday. Our friendly cashier, Sue, had just rung through my $350 order and I had my card in the machine when the lights went down. We were stranded. Held hostage for a few minutes by the electricity fairies. But at least we were not on a chair lift, suspended over a deep valley.
I’m not sure what we would have done if the power had not returned. As it was, we had to unbag and re-scan each item all over again.
The power went out for close to 100,000 hydro customers Christmas Eve. We weren’t among them, but we have had our power go out before while awaiting 20 people for a regular Sunday dinner. I wanted to cancel but the Farmer just considered it a challenge. We lit candles and he cooked our dinner on the bbq.
Over the holidays we gathered the women and children together for a very special photo session. With the arrival of Leti, my granddaughter, we now have five generations. My grandmother, Victoria, is 100. Her daughter, my mother Maureen, is 71. I am 47, my daughter Anastasia is 24, the same age my mother was when she had me. Leti is just a month old. I look at the five faces in that photograph and I think about how different life is for each of us.
My grandmother grew up on a farm in . She had five children: four boys and a girl, my mother. Grandma’s marriage ended in the 1950’s, when she was in her late 30’s. I can just imagine the stress she went through, working to make ends meet, raising five kids on her own. The struggles in her life only rounded out her character. She has a great sense of humour, a quick Irish temper, and a buoyant, optimistic spirit. I think I inherited that from her, at least, if not her tenacity.
My mother has her mother’s boundless energy. She too sings from morning to night, and hurries to get things done effectively and efficiently. I have never seen her being lazy. She doesn’t even slow down enough to get sick. She is always doing at least two things at once. If she is watching television, she is also folding laundry. When we were young she always worked outside the home, returning after a full day in the office to whip something up in the kitchen and get dinner on the table by 6.
I always have at least two things on the go: a project / course / book as well as my day job. I’ve been a single mom for a time as well so I understand the value of a dollar and I am constantly worried there won’t be enough. It’s a hard feeling to shake. I value the things money can’t buy far more, however, and I thank the women in my life for that. I’m trying to remember not to let the distractions of technology get in the way of enjoying the people around me. I need to focus more, and to live in the moment. My husband has that gift mastered, and I do well to follow his lead.
Anastasia is not your typical twenty-four-year-old. She has no Facebook profile; she prefers to spend her time out of doors with her four dogs, her husband and now, her baby daughter. It will be fun to watch as the new Anastasia emerges. The Annie that is raising a child.


I look at this tiny new baby, Leti, and wonder what life will be like by the time she is ready to be a mom. How important will technology be for us then, or will we have learned to put electronic devices in the background where they belong? Maybe by the time Leti is an adult, we will be growing their own food and finding alternative ways of travel that do not pollute the earth. Or maybe that will take another generation, or two.

Request your copy of "The Accidental Farmwife" book, at: dianafisher1@gmail.com
Posted by Diana Leeson Fisher at 12:42 PM 0 comments