Happy 7th Anniversary to the Farmer from his Farmwife

Seven years ago this week, I became The Farmer’s Wife. Recently I saw a meme on Facebook asking “If you had to marry your partner on the exact spot you first met, where would that be?” I first met the Farmer when my mom brought me to his farm to pick up a Thanksgiving turkey. And we did get married on the farm, so I guess we did it right.
My middle daughter Anastasia (now married herself), was my event planner, designer and coordinator. The did the catering – roast beef, salads, potatoes and rolls. A substantial farm meal. The first of many to come. My mother-in-law-to-be, Lorna, baked three of her specialty buttermilk-chocolate cakes with cream cheese icing and decorated them simply with silk flowers on top. A good friend of mine since forever, Jenny brought her own boxes of colourful flowers to provide a backdrop for the altar, which the Farmer had created under a homemade rose arbour he built specially for the occasion.
Corey Arcand pitched a huge party tent on the lawn behind the farmhouse. Our friends and family helped us set up the decorations we rented – silk flower trellises, yards of tulle fabric, an old farm door and a white picket fence. The Farmer built a dance floor and set it in the middle of the tent. Pots of fall chrysanthemums in rich burgundy and gold – my favourite colour and his – lined the front of the head table.
The caterers set up dining tables and lined up chairs on both sides of the aisle leading to the altar. The bar-and-buffet tent was installed and the porta-pottie arrived. As we sat down to our rehearsal dinner that night, I had a little panic attack. I worried the girls hadn’t organized the music for the reception. The Farmer pulled me outside for a moment.
“Deep breath,” he advised, and pulled me into a big, warm hug. “It will all come together. Don’t tire yourself out. It’s just a great big party with a little bitty wedding in the middle.” That centred me and brought me back to earth.
The day of our wedding dawned damp and cool but the sun quickly warmed things up and dried out the grass. The girls and I headed to Rhonda’s for our up-do hairstyles and some breakfast.
Back at home, we darted past the Farmer and his men and sequestered ourselves in the big bedroom at the back of the house. My eldest, Milena, did my makeup and Jenny started what would turn out to be about 12 solid hours of photography – her priceless wedding gift to us. When someone you’ve known most of your life takes your wedding photos, they don’t have staged scenes in mind. They wait until they see something they recognize as truly you, then click.
My dress came from the bridal salon that was closing in Kemptville, so I got it at a really good price. The veil cost more than the dress but we have certainly gotten our money’s worth on that as it has been worn by two other women in my family since. It’s the family veil.
My mother and father walked me down the aisle, one on either side. I’m so grateful to have shared my wedding day with Dad, as we would be saying our final goodbyes just five months later.
I wanted our five daughters to feel involved in this new union so they each were given a verse to read from “On Children” in The Prophet by Kahlil Gibran. The Farmer and I wrote our own wedding vows. His had something to do with hunting and fishing and not spending too much time on the couch. The reverend from the officiated, and the rain held off, though the wind threatened to blow the veil right off my head. Danny Rembadi stood beside the altar and played his guitar and sang, providing the perfect soundtrack for the event.
We drove the pickup to the back of the pasture and Jenny took more photos in the tractor lane and meadow. Then we had dinner, speeches and dancing under the big white tent. The sky finally opened and the rain came down after dark, but by then no one cared anymore about getting a little muddy and wet. Besides, I hear it’s good luck to have a little rain on your wedding day. It was an awesome day, full of great memories, and every year we celebrate it with another great big party on the farm.
Happy Anniversary, to the Farmer. You have made me one happy Farmwife. Xo 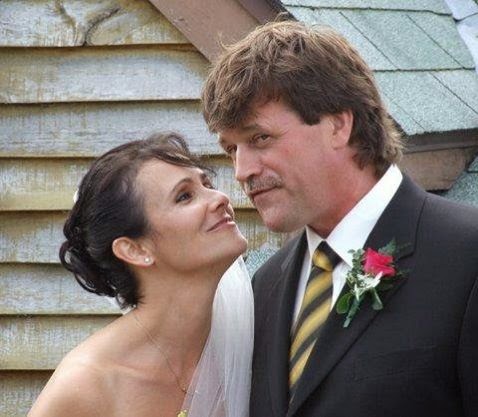 Posted by Diana Leeson Fisher at 8:30 AM 0 comments Posted by Diana Leeson Fisher at 8:03 AM 0 comments

I realize the Brothers Grimm tale of a donkey, dog, cat and rooster is fictional but mismatched inter-species friendships happen all the time. Take my trio of donkey, horse and sheep for example. Some animals just don’t like to be alone, so they pair up with whomever they can find. Others could care less, are quite happy in their solitude, and use their independence to torment the pack-dwellers at times. I am thinking of Donkey as I write this.
When the two Belgian horses arrived at the farm, Donkey was quite smitten. He followed them around the barnyard and they tortured him by gracefully shaking out their long blonde manes and thundering away across the pasture, leaving him to follow with his weird sideways trot.
After Ashley died suddenly and unexpectedly, Misty was left without her half-sister, best friend and leader. She climbed the manure heap, using it as a lookout post, and whinnied, tossing her head that way she does, looking for her sister. Every day for over a week she ran up and down the pasture, searching for Ashley. Eventually the Farmer pulled her aside for a long talk. He took Ashley’s old halter down off the hook in the stable and held it under Misty’s nose as he spoke. Then he put the dead horse’s halter on Misty, and Donkey got Misty’s discarded adornment.
That week Misty decided Donkey would be her new friend. She formed an attachment to the funny little guy and in many ways, he rose to her expectations. She no longer had to walk the pasture unaccompanied or sleep alone at night. When something truly scary like a barn cat or squirrel scurried by, Donkey got between it and the massive cowardly horse, protecting her.
Unfortunately, Donkey also likes to tease the horse at times. He doesn’t mind being alone, and is often strolling independently out to pasture while Misty isn’t looking. Many times she has come crashing out of the barn, in a panic, looking for her friend. She calls him again and again but he doesn’t answer. He just stands in the hedgerow out of sight, silently chewing and twitching his ears, as if he is amused at her discomfort.
When we sold the sheep I couldn’t give up Gracie. The Farmer warned that she would be ‘coyote bait’ without the rest of her flock. Safety in fluffy numbers, I guess. I am happy to report he was wrong, so far.
Her first week as lone sheep on the farm, Gracie stayed up at the barnyard, nickering and calling for her flock-mates. One day she even followed the truck that took them down the road to see if it would lead her to a reunion. She got distracted and wandered into the forest instead, and I had to go and pull her back out.
It took a long time for Gracie to get the courage to follow the horse and donkey down the field to the pasture meadow. But somewhere along the way, she decided that she would be safe from the coyotes – and from Donkey, who has been known to entertain himself by biting and chasing sheep – if she just stayed tucked in behind the horse. Sometimes she appears to be right under the horse. I just hope she doesn’t get stepped on.
I wondered what the horse thought of this new attachment. In the past she kept her distance from the sheep – particularly the lambs – because, I think, they made strange noises, she didn’t like the way they felt when she accidentally stepped on them, and anything small, fast and unpredictable is particularly terrifying her. It’s the elephant and the mouse story all over again.
The other day Misty started out to pasture, picking up the pace to catch up with Donkey. Suddenly she stopped, turned and whinnied at something. I went out onto the porch to see what she was excited about. Gracie was there, limping along. The sheep was favouring one foot that had been nicked in a hoof trimming session and it was slowing her down. The horse was telling her to hurry up. When the little sheep stopped to catch her breath, the huge Belgian trotted back up to the barnyard to accompany her on the long walk. I think she would have carried her if she could.


www.theaccidentalfarmwife.blogspot.com
Posted by Diana Leeson Fisher at 7:27 AM 0 comments