The cat came back, to toy with my emotions.

“The cat came back, the very next day…the cat came back – we thought he was a goner but the cat came back, he just wouldn’t stay away…” – Harry Miller, 1893.
Monday was not a good day. It started off ok, when the temperature rose to 23 degrees in the sunshine. But when I stepped out onto the back porch, the Farmer met me with a hard look on his face.
“Go back in the house, please.”
“Huh?” that was rude, I thought. Then… “Is there a dead cat in the pool?!” I guessed it. It has only happened a couple of times in the ten years I have been at the farm, because most of our cats are far too smart to go near the pool. We lost a kitten once, and a stray who was obviously unfamiliar with the landscape. I needed to know who the victim was this time, and I dreaded the answer.
“I need to see him,” I said, fearing the worst. Junior, one of our two barn cats who over-winters in the house, had only started his springtime excursions the day before. Could he be the cat who fell in the pool? The Farmer didn’t want to show me. I grabbed the feed bag he was holding and peeked inside. The wet body was mostly grey. I started to cry despite myself, and stomped off toward the house. It certainly looked like Junior the grey tabby to me.
“I don’t think he fell in,” said the Farmer. He was on top of the ice. It’s like he was in a fight with another cat and just died there.”
I slammed the door behind me and vowed to buy a pool cover so we would never lose another cat. I blamed myself for announcing the weather forecast to Junior and shoving him and his siblings outside. The other cats were acting strangely, sitting at the patio door and staring out at the pool. Perhaps they had witnessed the entire unfortunate event. I cried intermittently throughout the day, whenever I thought of my cheerful, rambunctious cat who trusted me for his care and safety. I felt sick and couldn’t eat.
Tuesday was a little better. I had a number of work-related distractions and needed to focus on writing assignments so I successfully put Junior out of my mind for most of the day.
Wednesday morning I went outside to check on our lame calf. I found her lying in the woodpile, out of the wind. Her foot is healing well, and I like that she lets me put hands on her. That always makes it easier if you have to catch them to treat them or to take milk for babies in the future.
On my way back into the house, I heard a “mrrttt” and saw a grey blur shoot through my legs. Junior! The missing cat had returned from the dead. I followed him into the basement, where he allowed me to pet him as he filled his face with food. He seemed rather frantic, as if he had been through quite an experience. For the rest of the morning he was quite vocal, either purring with voiced breathing as he groomed himself in front of the wood stove, or sitting at my feet as I worked in the kitchen and at my desk, a barrage of kitty questions directed at me.
Junior spent a good part of Wednesday morning racing up and down the stairs after Sheila and Sammy. He appeared quite happy to be home. He rolled on his back and ripped at the carpet on the stairs, forcing me to lock him in the basement until he calmed down. Junior is back. Might I add this is also the cat who was adopted as a kitten and summarily returned for his inability to adapt to his new human. It's not the first time he has made a triumphant return to the farm.
I feel very bad about the cat who died in or around my pool, and will take steps to ensure no one falls into it and drowns ever again. I still have no idea which cat ran out of his nine lives. I don’t think it was the white and black stray tomcat who likes to engage Sammy in fights that leave holes in his leg. The cat I saw was grey. Perhaps it was another stray. This time of year the males are off wandering to see who they can fight for territory. They are looking for females to impregnate and leaving a trail of wounded warriors in their wake.
I suspect Junior knows, and is trying to tell me. 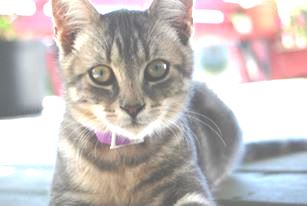 Posted by Diana Leeson Fisher at 8:39 AM 0 comments

What’s with all the owl sightings lately? First they started popping up in my Facebook feed. Someone snapped a pic of a Great Horned Owl on a tree in their backyard. Someone else shared a photo of a beautiful Barred Owl they spotted in the park. And then of course there was that Snowy Owl who got a close-up on a Montreal traffic camera last year. My social media feed is full of the feathered fellows.

Local media have done programs about the baiting of certain wild birds by photographers – so they could get the great shot. Is this why we are seeing so many owls? Because someone in our area has been trying to lure them? And what is the problem with that, anyway? Granted, it isn’t a very happy scenario for the tiny rodent being used as bait, but does it harm the owl?

There is a lot of money in wildlife photography if it is done well. Anything caught on film that we don’t typically see every day is a wonder to behold. The baiting of birds for this purpose can cause quite a bit of tension between photographers and birders, however. The former are trying to make a buck and a name for themselves, while the latter are trying to witness the bird in its natural habitat and behavior. Many birders are also concerned that the luring of birds with fake calls or bait will cause the animal to become too familiar and trusting of humans, who may lead them to harm, intentionally or not.

The Ottawa Field-Naturalists’ Club and other birding organizations have stopped posting owl sightings on their websites.  The baiting of birds is not illegal, but the concern is that the animal will in some way be harassed by the photographers. They might try to contain the bird or irritate it into opening its eyes for the shot.  Birding sites are developing and posting a Code of Conduct or ethics in an attempt to protect the birds from being bothered.

And then there is the belief that you should not interfere with wildlife or attempt to alter its behavior. The saying “a fed bear is a dead bear” is brought to mind. Owls can be quite trusting of humans and when they have found a suitable habitat, they often stay in the area. Once their location is discovered, they are at the mercy of the humans. In some cases when baited by a photographer the owls are being kept awake and prompted to hunt during the day, which is not their habit.

Some wildlife enthusiasts, on the other hand, argue that we feed other wild birds: why not owls? With live rodents as their main food source, they have been known to starve to death over a long winter. If we can help them to survive the cold, why shouldn’t we feed them? I’m not likely to go into a pet store and buy live mice for this purpose but if I knew an owl was hanging around my barn, fighting cats for mice and going hungry, I might be persuaded. The Farmer would think I was crazy, of course, putting live mice in a barn where we keep cats to control the rodent population.

I had my own owl sighting this winter. I was driving down Prince of Wales Drive, just north of Bankfield. The owl was on my left, perched atop a telephone pole. It appeared to be staring across the road at the billboard on the other side, which featured a photo of an owl, wings spread! I don’t know if owls can recognize a photo of another owl or not but if I hadn’t been in such a rush I would have pulled over and captured that spectacle on camera. I look for the bird every time I pass that spot now.
Fred Schueler of Bishop’s Mills sent me a photo of a Whet Owl that actually flew into his back porch when he left the door open a couple weeks ago. The bird might have just been seeking shelter, but it certainly knew which house to enter. Schueler is a renowned naturalist. If the owl stays around long enough, it might even get to be the subject of a painting by Fred’s partner, wildlife artist Aleta Karstad. 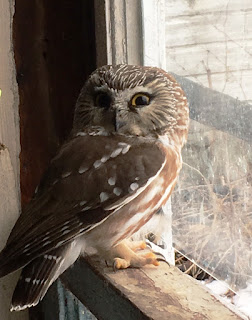 Posted by Diana Leeson Fisher at 7:30 AM 0 comments