To hunt or not to hunt, that is the question

You don’t venture into our neck of the woods without an orange vest this time of year. The regular deer hunting season is wrapping up but muzzle loader week is about to start. We aren’t exactly hunter’s paradise like in the Muskoka region, for example. But we do have our fair share of hereditary hunters. They have grown up with it as part of their lifestyle and culture.

As we are located about fifteen minutes out of town, we have a fair amount of neighbours who are neither familiar nor comfortable with the sport of hunting. Those who hunt are, for the most part, respectful of those who do not wish to see hunting happening in their neighbourhood. They might hear it, but they shouldn’t see it.

I find after the first few days of the hunt, if a party is not successful, they may become careless. I was taking a walk one morning a few Novembers past, and I saw a man in orange backing up toward the road. He stood in the ditch and held his gun up to aim back into the field he had just left. I stopped just a few feet behind him.

“Do me a favour,” I asked, “and don’t shoot until I’m around the corner!” You aren’t supposed to hunt anywhere near a roadway but this group probably had a dog chasing the deer out of the bush and they didn’t want the animal to make it to the road. I heard the gunshot just as I rounded the corner.
Most motorists would agree they would prefer not to see a deer near the road either. That is one of the positive effects of hunting in our region: it limits the number of animals that end up in front of a moving vehicle, risking the lives of the driver and passengers as well as the deer.

Hunting is a great way to ‘naturally’ control the deer population. The rules are there for a reason, however. It is not cool to bait deer with corn or sweetfeed. You can feed them to help them last through the long, cold winter but you should not be luring them out into the open just so that you can shoot them. A true hunter gives the animal a fighting chance. It’s as though the universe has to offer the animal up to the hunter, or it just isn’t fair.

We have 200 acres of mixed forest, pasture and crops. In my ten years here I have only seen deer a few times. We have seen sign of them, when they leave their antler scratches on the trees or paw the soft earth on the tractor lane. But you really have to know what you are looking for. I never would have found those marks on my own. These elusive animals are so good at hiding, it really is a miracle when one appears close enough to the hunter in his deer stand to actually be shot.

Venison is a nice, lean meat so it’s a very healthy menu choice. Our hunter/chef prepares his venison like a roast and we often serve it with red pepper jelly or mushroom gravy. He only shoots the animal that he thinks will make a good meal. If he shoots it, we eat it. There is no trophy hunting here. The King of the Forest in his ten-point glory is safe from the Hunter and his gun.

Fergus and I are looking forward to the end of hunting season for a number of reasons. The Farmer has cut a trail through the woods for us, so we are anxious to check it out on our daily walks. It isn’t safe to go out there at the moment, however, because we have hunters on all our neighbouring properties and our doe-coloured dog tends to spring and bound like a deer.

Fergus also finds the sound of gunshots to be a bit startling. He barks and demands to go outside, where he stands and stares in the direction of the shots, growling and harrumphing to himself. In deer season it’s usually only one shot, however. That’s all you get so you had better know what you are shooting at.

There is one thing Fergus loves about deer hunting season. When we are finished our meal of venison, it doesn’t make a great leftover. The meat becomes a bit dried out and tough. IF you wash off all the gravy and spices, however, and chop it into little pieces, it makes an excellent treat for a young Golden Retriever.

The cattle are gone. We are a livestock-free farm. I posted on Facebook that I was sad to see them go and within minutes their new owner posted back: “They are in good hands. The move went well and they all settled in without an issue. Apples and grain for all upon arrival.” He already knows the way to their hearts. I can rest easy.

With no bull in the barnyard and no cattle in the pasture, we can now wander our property freely. The Farmer and I decided to take the Ferg on walkabout. We went through the gate to the barnyard and had to coax him along on the end of the leash. The last time he went through that fence he got zapped by his wireless security collar. He has a good memory. Now he knows it’s ok to go out of his boundaries, if one of us is with him. It took him a few tries to get used to going down the driveway as well. I think at 8 months he is now old enough to know the difference.

We let him off his leash and he bounded across the barnyard after a squirrel, whimpering when it darted up a tree out of his reach. He stopped to pick up a dried cow patty but dropped it immediately when scolded. “Go find a stick,” I encouraged him. We reached the edge of the forest and opened another gate. Stepping into the trees, I heard a whimper and turned to see Fergus sitting there at the gate. “It’s ok, Ferg. Good boy. Come on now.” And he gingerly stepped into the ferns.

That first section of the forest was a bouquet of fallen leaves, deer marks and porcupine poop for Fergus to discover. He leaped over tree stumps and limbo’ed under fallen branches, following one scent trail after another. The second part of the forest, closer to the creek, was less fun. I was getting snagged and scratched through my jeans by thorny bushes at every step. He didn’t complain but I imagine it wasn’t very comfortable at dog level either.

Then we reached the cornfield. A section of corn about ten feet wide had been trampled all around the perimeter. I thought a tractor had done it but the Farmer said no, it was wildlife. Even raccoons can bring down stands of corn quite effectively. What a mess. Fergus pointed out the little high-heeled hoofmarks left behind by deer and the tiny clawed handprints of raccoons.

When we reached the creek, Fergus lost his mind. He raced down to the water’s edge, lured by the smell of frogs. As soon as he reached the water though, he stopped short. I don’t think we have to worry about him jumping in just yet. It still takes a bit of convincing to get him to try something new. We checked out the duck blind and Fergus sat quietly watching a family quacking along the edge of the creek. When we turned to head back into the forest, however, he burst into action, running in frantic circles as fast as he could go. I think he was trying to tell us he was happy. He is off leash all the time around the house but going on walkabout is a whole other experience. The assortment of smells must be quite a delight for his heightened senses.

When we returned from our trail walk the Farmer decided to cut a permanent trail through the woods for us. I will look for cross-country skis so that Mina and I can enjoy them this winter. For now, the trails will give us a great walking path for Fergus so that he doesn’t get attacked by thorns anymore. He can go off-leash and enjoy all 200 acres of his property safely.

We haven’t had a chance to try out the new forest pathways yet, because hunting season is now underway. There aren’t supposed to be any uninvited hunters on our property, but we aren’t taking any chances. We will have to wait a few more days until it is safe to once again venture into the forest with a doe-coloured dog who bounces through the brush like a deer. 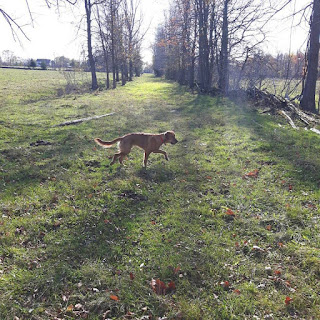 Posted by Diana Leeson Fisher at 11:01 AM 0 comments