Back in the saddle again

Now that Covid numbers are back on the rise, it’s time to come up with some creative ways to spend time with family and friends. When my daughter posted a photo of herself taking horseback riding lessons, I asked if I could tag along.

I haven’t been riding for over ten years. And even then, I was just refreshing my childhood knowledge of the basics. I didn’t even get past the level of a trot. Not on purpose, anyway. I was on a horse once who had ‘spring fever’ with a heat thrown into the mix. She took me on an unsolicited canter that had me laughing maniacally as I flopped around the ring. That episode marked the end of my last session of riding lessons.

I am a bit nervous around horses, as they tend to be unpredictable. Of course, horses are very sensitive so if you bring your nerves around them, it has the potential to be contagious. The instructor, Debbie Williams of Turnout Stables, has known me for about 40 years so she chose a horse that was particularly well-seasoned and easygoing for me to ride.

His name is Nigel. I once had a roommate named Nigel. He was from London, England, and he liked to make a teepee out of his toast in the morning after it emerged from the toaster, to make it crispy. As a result of this mental connection, I spoke to my horse with a British accent for the remainder of the lesson.

The horses were just being let into the barn when I arrived at dusk. I say let in and not led in, because the girls in the barn literally opened one door at a time to allow in their various charges, who seemed to know which stall was theirs. Some of them tried their neighbour’s stall first to see if they had better treats.

Once my horse Nigel was brought in, we attached the cross chains to each side of his halter and I introduced myself. I followed my instructor’s directions to brush the horse all over. I noted Nigel had huge burrs in his mane. He must have been rolling in the meadow that sunny afternoon. I always get nervous lifting the hooves to pick the mud out of them, but Nigel was fairly agreeable. To be honest, I think he slept through most of it.

Once in the riding ring, Nigel walked in a slow wiggle around the ring, allowing me to reacquaint myself with the necessary leg placement and hip movements. I gave him a tap with my bedazzled riding crop and we moved up into a nice trot. An hour of squatting, posting and bouncing gave me quite a workout, to which my muscles would loudly attest the next day.

Debbie says her riding school membership has multiplied exponentially since the beginning of the virus restrictions. I’m happy to be back in the saddle again. I will have to stock up on allergy meds, though. I just remembered I'm allergic. 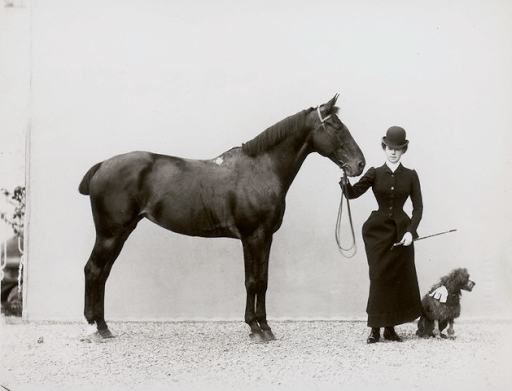