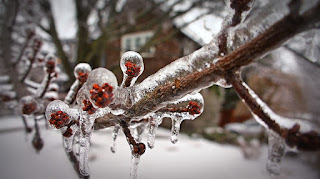 Twenty years ago this week, I was a young mom of 3, living in the suburbs of Ottawa. I got up at 3am as usual, because I had an early morning paper route before starting my day in my home daycare. When I opened the front door and stepped outside into the dark pre-dawn, I had a sinking feeling. The world was encased in ice.

It wasn’t very cold outside, and I had to admit it was beautiful. The ice hung from the trees like diamond necklaces. My early morning paper runs were usually peaceful and sometimes eerie, because it was during the time that even most nighthawks had turned in for the night. It was completely silent. No wind. No sound at all.

I was the only vehicle on the road. I drove more slowly than usual. I was on glare ice. When I stepped out onto the parking lot and began to load bundles of newspapers into the back of my van I realized I wasn’t going to be able to do my job as expected. I couldn’t get a sure footing on the ice. I made a mental note to pick up boot spikes as soon as the stores opened. The paper would be late that day.

I parked my van at the entrance to my allotted delivery zone and picked up a bundle of papers. I skated between the houses and slid down the driveways. As occupants of the large suburban homes began to wake up and step outside to collect the morning news I heard some of them exclaim aloud. Some swore. Others laughed. I laughed too, at the thought of how ridiculous I must look, clinging to parked cars and sliding down slopes on my bum.

It took me two hours longer than usual to deliver all of my papers but there was really no rush. My home daycare would not be open that day, and very few people would be going to work. Very few people would be leaving their homes at all, actually. My 6-year-old daughter had just one guest show up at her birthday party.

As the Great Ice Storm of 1998 took hold, it became apparent that we were the lucky ones, in the south end of Ottawa. In Kemptville where my parents lived, people were installing generators to replace the electricity they had lost when the build-up of ice caused the power lines to bend and snap.
I was keeping in touch with my parents every day. Then one day my father didn’t answer. Two more days went by and I began to worry. He had a generator in his garage, and despite widespread advice to keep the door open for better airflow, he said he was locking his garage doors so his generator would not be one of the many being stolen. I imagined with horror that he had inadvertently gassed himself, and that was why he wasn’t answering his phone. So I did what anyone would do in my situation. I called a friend who was volunteering on the rescue crew, and asked him to check on Dad.
My friend was busy, so he sent in the military. My dad was not impressed. But I got a phone call.
“You idiot.” It was a relief to hear his voice on the line, even if he was using his usual terms of endearment. “Hydro told us not to use our phones, so I unplugged mine.”

We worked out a system where I could get a message and be reassured every day that he and Mom were fine. Their power was out 21 days in the end. I felt guilty, sitting in Barrhaven, nice and warm. All we lost was our cable TV.

Without that television, however, my girls had to find something else to do. I walked past the living room and saw them sitting in front of the glass insert to the fireplace, which we rarely used.

“Ma. I see a face,” my eldest announced.
“Yeah. It’s yours. You can see yourself in the glass,” I explained.
“No. It’s a little face,” she declared.

And then as I stepped closer, I suddenly saw a tiny little face pop up in the window of the fireplace. It was a squirrel. I was happy the girls hadn’t tried to open the door to examine their discovery. I didn’t need a family of squirrels in the house. I guess they had taken refuge in our fireplace when the ice storm filled in their home. We left them alone and when I checked a week later, they were gone.
Everyone has their own story of the Ice Storm that hit Eastern Ontario two decades ago. And hopefully we all learned a bit about how best to prepare for the next one.

When I lived in Asia the New Year tradition was to clean house. Top to bottom, every drawer, closet, nook and cranny. Out with the old to make room for the new. It’s a tradition that leans toward the spiritual in nature, because you are symbolically sweeping old habits and bad luck out the door along with the dust bunnies, leaving a clean surface on which to welcome the New Year and all its possibilities.  I still follow that tradition to some extent, getting rid of clothes I haven’t worn in a year and throwing out old broken and tired-out Christmas décor and even some unwanted pieces of furniture. It’s very therapeutic, this annual purge.

After taking down the Christmas tree, I like to move furniture around. This year I threw out the two old couches in the back room. Fergus was a bit distressed until he discovered the pillows had gone into his crate. They are perfectly wedged in there and he can’t get a grip to rip the heck out of them.
The Farmer is cleaning out his kitchen cupboards and drawers (his territory; I am forbidden to mess with his herbs and spices) to make room for his new cooking implements and gadgets. He too has the New Year’s urge to purge. I suspect the basement is next. I have warned the cats. All of their favourite perching spots are in jeopardy if they are atop items that we no longer need or can fix.

Another popular way to usher in a new year, particularly after all that holiday food and drink, is to launch an exercise program. Well my routine rarely extends beyond Pilates and yoga but since we are now hosting a student from Norway who was pretty much raised on cross-country skis, we decided to try and locate a pair for her so she can enjoy winter in the manner to which she is accustomed. The Farmer climbed up into the shed loft and pulled down a few dusty old pairs of skis and poles. My father-in-law also showed up with a couple more, and boots to match. They could have been left by one of his five offspring – now in their 50’s and 60’s…but we suspect he got them at a garage sale.
When we presented the many choices to Mina, she laughed. “I have only seen skis like that in a museum!” she said. Clearly they wouldn’t do. Her parents had her very own pair of ski boots shipped to her from home. A week later a brand new pair of Fischer skis (not to be confused with Fisher skis…) arrived on our doorstep. Then, as if it had been waiting, the snow arrived. In copious amounts.

On Boxing Day, the sun rose high and shone down warm on a thick blanket of new snow. Encouraged, I trudged out to the shed and pulled on a pair of boots. They fit perfectly over two pairs of socks. Next I dropped a pair of skis onto the snow in front of me and slid the boot into place. I pressed down on the fastener with my pole. Click. They fit. No excuses now. I set off across the barnyard, sinking about six inches below the snow. The dog ran ahead of me and blazed a trail. It was hard work, and the most exercise I have had in months, but it was worth it. With no wind to deter me, I was thoroughly enjoying my trek.

At first I thought it was a whim of my own until I heard a swishing behind me. And a bit of panting. There was the Farmer, over-dressed in his farm gear, trying to catch up.

We had about 50 metres of romantic skiing together through the first section of our forest before my husband gave up on his skis, which kept popping off because they did not fit his boots. He will need an adjustment before he heads out again because walking back to the house was far more difficult than skiing out. And by adjustment I meant his ski equipment but it might also apply to his spine at this point.

Mina caught up and passed us, dressed in her streamlined ski gear and flashing lime green skis. She now has almost 200 acres to enjoy, with Fergus at her side. If we can figure out how to strap a toboggan to his butt he may also be put to good use blazing a trail through the freshly fallen snow.
Happy New Year, everyone. 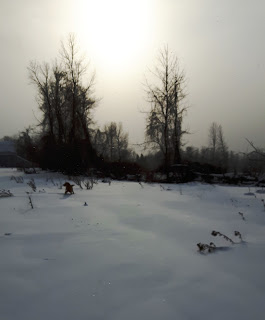