It is said that cats have 9 lives. That refers to the cat’s characteristically reckless behaviour, stemming from its innate curiosity and thrill-seeking instincts. These tendencies for adventure tend to get cats into one mess after another, but they usually, somehow miraculously, escape. At least that’s the way the story goes. They spend one life after another, until one day their fate catches up with them. That may be the typical pattern of a stray or feral cat. But what of the pampered domestic cat? How long does it take them to spend their 9 lives?
Sheila, our rather grouchy barncat-turned-housecat, is 9 years old. She is a rather diminutive little beast, with a tiny head and paws on a rather plump body. Sheila has always hated being picked up. I found her in the bottom of a barrel in the barn one day in the spring of 2010, where she had obviously fallen while her mother was attempting to transport her kittens from one spot to another. Even then, when I scooped her up into my arms, rescuing her from the depths of darkness, she squawked at me, ungratefully.
Every day I went out to the barn to check on the kittens. Tiny little Sheila, the smallest kitten of them all, would march right up to me and growl accusingly. The kittens had runny eyes, so I had to give them eye drops. Most of them were pretty docile but I think I still have the scars around my wrists where Sheila tried to skin me alive. https://theaccidentalfarmwife.blogspot.com/2019/03/a-dog-dictionary-has-300-words.html
When she was old enough to leave her mother, Sheila decided she would use her sharp little claws to pull herself up the steps to the back porch. The next time the patio door slid open, in she went. And she has been our self-proclaimed housecat ever since. She isn’t very friendly, but if you sit really still she will come and sit on the chair or couch beside you. Occasionally she will even venture onto a lap but that doesn’t last for long. The human lap is not to her liking. She prefers the comfort of an overstuffed chair or pillow.
Sheila has always had a bit of a fussy stomach – if you give her too many treats you will see them again. I took her to the vet to get her stomach examined, thinking that might be why she hates being picked up – because her belly hurts. After a thorough examination, the vet confirmed that Sheila is perfectly healthy and does not suffer any particular intestinal disorder. She just tends to overindulge in cat treats, and she is just a grumpy cat.
We have come to know and love Sheila and her negative attitude. It’s just who she is. Which is why I am a bit concerned by her recent behaviour. Often I will be standing at the kitchen counter, preparing something to eat, and the sound and smell attracts the cat. Sheila will then sidle up to me and squawk. If I don’t immediately give her a bite of whatever I am preparing, she will give my calf a little nip and then pounce away to hide. Lately, however, Sheila has been acting in a way that is most unusual and out of character for the grouchiest of cats. Sheila has been coming around, looking for cuddles.
I picked her up and gave her a quick examination. Sure enough, she had a bit of a leaky ear. She was trying to get my attention so that I would help her. I gave her a few doses of antibiotic ear drops and fixed her right up. The next week, she had a runny eye. Maybe she had a cold virus. Again, eye drops seemed to help.
Then the weirdest thing happened. I was sitting on the couch and Sheila jumped up onto my lap. Instead of turning away from me, she put her head on my chest, as if she wanted to be petted. It suddenly occurred to me that our grouchy little cat is entering her senior years. Maybe her personality is undergoing a bit of a softening as a result.

Posted by Diana Leeson Fisher at 10:43 AM 0 comments

A dog dictionary has 300 words


The Farmer read somewhere that a dog can remember and understand up to 300 words. Our trainer told us it is best to group them in no more than two or three words at a time, for better understanding. For example, I can point and say “out” and Fergus immediately backs his caboose up and out of the kitchen or whatever forbidden area he has ventured into. The Farmer insists on using full sentences: “Fergus Fisher. Would you please get out of my kitchen…” and wonders why the dog just sits there drooling.
Since he was a pup I have taught the Ferg to sit and wait until I am finished filling his food bowl, before he can eat. I hold up one finger and say: “Waaaaaaait…..” and then I point at the food and say, “Ok.” I use the same command when I get him to lie down and wait for a treat. He is very good at following this direction. So much so that when I took him for our first leashed walk in ages (normally he just runs off leash in the yard), I tried the “wait…ok” command to get him to slow down and stop pulling me and it worked. Which is a good thing because he is so strong now he can pull me along the ice and off my feet in one yank of the lead.
Fergus knows all the basic words to do with eating, playing and….bathing, which he has actually come to enjoy. It took us a few months to figure out that he is nervous getting in and out of the tub because it is slippery. He also doesn’t like the water running while he is in the tub. He isn’t much for the shower nozzle either. Like a toddler, he prefers to have his shampoo rinsed with the bucket-over-the-head method. Followed immediately by a dog treat. If you use this process, he doesn’t run and hide when he hears the word, “bath.” He actually tried to get in the tub himself the other day.
Fergus also seems to know the names of his favourite humans. You only have to say “Paulina” once and he’s up off his bed, nose pressed to the window or asking to be let outside so he can sit and wait in the driveway for her car. He can hear her car coming from a good 2k down the road, the noise of the tires crunching over the icy gravel much clearer to his ears than to ours. She is the one who gets down on the floor with him and lets him play-fight and wrestle with her until he is exhausted. He thinks she is awesome.
Perhaps Fergus’ most wonderful word in the dog dictionary is “ball.” This is the only toy he has been unable to destroy. Every other chew toy or stuffie has been de-squeaked, decapitated and de-fluffed within ten minutes of presentation. Much as I would like my four-legged child to have toys to play with, I’m tired of throwing money away. The “chuck-it” hard rubber ball is the only thing worth my dollars.
So we have a closet full of hard rubber chuck-it balls in orange, blue and glow-in-the-dark (but lose in the snow) white. I have a plastic throwing arm that I use to pitch the ball much farther than I could with my own weak, uncoordinated limbs. This is how I exercise my dog when I don’t have time to go for a walk and the weather is inhospitable for a hike in the back 40. Ferg knows the meaning of “go get it!”
I work from home one day a week, and Fergus makes sure that I give my eyes a break from the screen every hour to throw the ball for him. As a result, he has also learned, “no, Fergus. Mama is WORKING.” Not his favourite word. To Fergus, it means go away and find something to play with on your own because I am too busy to play with you. Unfortunately if he feels slighted by this brushing off, he often goes and takes his frustration out on the nearest potted plant, lawn chair or snow shovel, depending on the season.
Approaching two years of age, Fergus likely has a few dozen words left before we fill up his dictionary. We shall choose wisely, and perhaps throw a few funny ones in there, for our own entertainment. 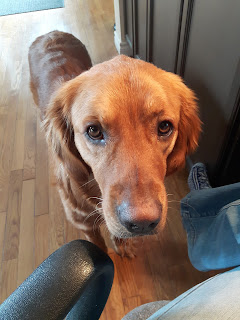 Posted by Diana Leeson Fisher at 10:37 AM 0 comments