Fergus has a bad case of vernalagnia

They say a dog understands up to 300 words. When we speak to them, we aren’t supposed to muddle those words up in complicated sentences. We are supposed to speak a maximum of three words at a time: “get the ball;” “time to eat;” “come HERE;” and “Get OUT.”

Apparently our Golden Retriever Fergus seems to think that when the neighbour’s dog comes outside and ventures near the fence line dividing our properties, and I see what Ferg is thinking and I say, “NO,” that actually means, “Go get him, Ferg!” It happens every time. I see the big, muscular full male dog (Ferg hates that Rocky still has his family jewels and he does not) slinking along the trees (Ferg hates slinking), which he is completely entitled to do, as it is his own property. Ferg sees this from his perch on the porch, and starts to shake. I see what’s going on and say quietly, “come here, Ferg…” to no avail. Ferg gives me a slow side eye. He gathers his body up underneath him into a pouncing stance…I say, in what I hope is a firm tone, “NO, Ferg!” and off he goes like a shot.

When that happens, I have either forgotten to put his radar collar on him, or it just isn’t working and needs to be reset. He knows when it is juiced up and when it isn’t.  He’s pretty good at avoiding the zap.

Sometimes while Ferg is marauding next door, he takes the opportunity to chase chickens and ducks. They make delightful sounds and sometimes feathers fly. It’s a fun game. I don’t think he has ever hurt a chicken but I brought the owners one of ours out of the freezer once as compensation for the stress.

When Rocky is put in the house and the birds are back in their coop, Ferg struts home, triumphant. Unfortunately this seems to be happening more frequently, now that the smell of spring is in the air and both dogs are spending more time outside. It’s getting pretty embarrassing. My dog seems to feel the need to assert his dominance, even outside his clear territory. I don’t remember this being a problem in summer – probably because the leaves are on the trees and the dogs can no longer see each other.

This “spring fever” has also started to affect Fergus’ bedtime routine. I used to let him out for one more run around the yard, before retiring for the night. Lately, he just doesn’t want to come back in. I let him out, he bolts through the invisible fence and just keeps trotting up the driveway or into the open field under the moonlight.

It seems silly but I have to take him out for his evening walk around our own yard on a leash. He can’t be trusted and I don’t want him to meet a skunk or porcupine. 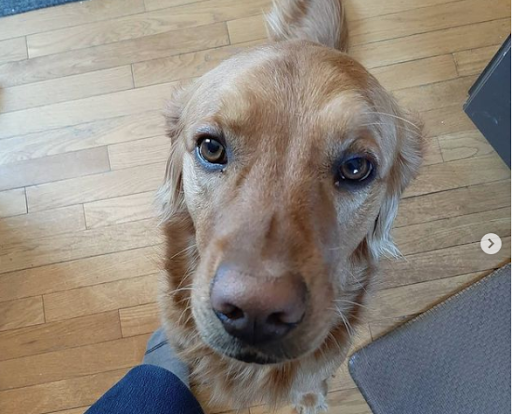