The Farmer has been deaf in one ear for as long as he can remember. He suspects it is a result of hunting, because it’s on the side where he holds his gun and is most affected by the sound of gunshot. For the most part it has been a non-issue. He doesn’t always ‘hear’ me when I’m in the next room, because he reads lips. But I think he is fairly comfortable in his quiet existence. He sleeps really well, on his good ear.

My husband has hearing aids – the really good kind. But they have to be adjusted to his environment and he has to take the effort to maintain them. And he has to want to hear. I don’t think he feels he is missing out on anything by not being able to hear every little sound. He hears the big ones. That seems to be enough.

He himself must have made a big sound back in August when, after hastily climbing the ladder at our cottage building site to apply one final coat of stain on the trim, he fell. Normally he nails a brace bar at the bottom of the ladder but as it was the end of the day and he was anxious to get home, he didn’t bother. The ladder began to wobble and slide and shake. He shook along with it. Suddenly it flipped, flinging the Farmer to the rocky ground below.

He landed on a rock, bashed his wrist watch, jostled his brain a bit and broke two ribs. He didn’t want to call an ambulance, because not only would they find it difficult to locate him at this out-of-the-way building site, but he might be forced to leave his beloved doggo behind. So he gingerly lifted himself out of the ditch where he had landed beside the cottage, succumbing to dog licks all over his face while he remained low to the ground. He took his time closing doors and turning off equipment before gathering his things and ushering the pooch into the back of the truck. It was difficult to hoist himself into the driver’s seat, but he eventually managed. He drove himself to the Smiths Falls Hospital.

Our daughter is a nurse in Smiths Falls. It was her day off but as soon as he called her she jumped in the car to meet him there. He was a bit disappointed to be informed that if you drive yourself to the hospital, you have to get yourself inside. They do not come rushing out to greet you with a wheelchair or a gurney. The shock of the fall likely kept the pain at bay, or at least under control, until he was safely in the emergency room.

That’s where I found him an hour later. He was quite a sight, with the red wood stain that had spattered his clothing making him look like he had attended a violent murder scene. His hair was standing straight on end, he was topless and he had a Golden Retriever tied to the end of his hospital bed. Fergus was drinking from what appeared to be a plastic bed pan. I was assured it had been sterilized.

“Oh, you look like a hobo!” I cried, relieved to see he was in good hands.

The next week was difficult, as I attempted to work from home while playing nurse to my busted-up husband. He had been prescribed opioids and I was determined to watch over him as he took his daily dose of painkillers. Luckily I had the real nurse at the end of the phone line so I could text for advice when necessary. They don’t bind broken ribs anymore – they want you to take deep breaths to avoid fluid buildup on the lungs. We just alternated hot and cold as per the doc’s advice but fluid built up anyway and we had to go to the hospital to have the lungs drained.

The Farmer suffered through a family wedding that he was loathe to miss out on, and that is when he revealed a side effect of his fall. Suddenly I felt I was in the middle of a National Lampoon movie – or an episode of Corner Gas.

“I may have broken ribs when I fell but you know what? I think I got my hearing back!” he announced proudly.

This is the Farmer’s new response every time I tell him he should be getting his hearing aid adjusted. He says his hearing is perfectly fine, thank you. It’s my mumbling that is the problem.
-30-

The Farm has a Memory 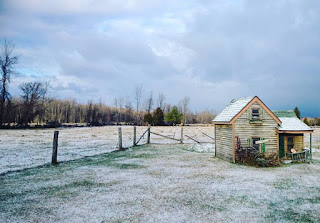 In the winter when there are no crops in the fields, Fergus and I go for walks. I take off his radar collar and he bounds like a deer to the farm gate at the edge of the lawn, where the barnyard begins. He sits and looks at me out of the side of his eye.

“Wait…wait…and….go!” A flash of furry red disappears around the side of the shed, toward the big old barn. We do the rounds before we go on our walk, just as I always did, even though we don’t have livestock anymore. I think Fergus knows that many animals lived here before he did. He can sense them.

As we round the old log barn at the end of the lane, a black squirrel scolds us from the top of the tree. Fergus puts his paws on the trunk and wills himself up to no avail. He whimpers, then gives up, distracted by something in the corn field. I worry that his leaping over ragged wooden cornstalks will cut his feet but he has perfect dexterity and returns without a scratch.

I peek into the log barn. We used one half as a chicken coop, covering the windows with chicken wire to keep the birds in and blankets to keep the draft out. That was before the day some animal decided to teach its young how to kill one night. We lost 67 birds that day. Now we keep our chicks in the shed close to the house. There is enough activity there that a predator isn’t likely to strike.

The other half of the log barn, with its tiny pen, was a favourite of our cow Julie. She wedged herself and her calf in there as an escape from the mosquitoes, I think. The logs have a magical cooling effect as well. That was one smart cow – but the logs suffered a bit as a result of her big butt body checks.
We rounded the barn and I remembered the first time I witnessed a calf being born – in April, 2008.

Betty hadn’t even looked pregnant. She was such a big Hereford – she carried it well. Sure enough, though, she gave birth to a healthy girl: Mocha – who went on to have calves of her own. We were lucky that most of our calving seasons went off without a hitch – but we did learn that there is no use waiting around the barn for something to happen: the cows always waited until we were gone to give birth. If we were lucky, we caught the tail end of the event.

As we rounded the end of the barn I remembered the first winter with our big Belgian horses, when Ashley stepped on my foot with her big dinner-plate hoof. I just sunk down into the mud and snow beneath her, but she froze, holding her hoof up in mid-air as if she had stepped on something rather squishy and distasteful.

Ferg stops to peek between the barn boards at my daughter’s sports car that is over wintering in our barn. The Mustang is the only animal in there right now. I wondered how many ghosts were watching from inside the structure. Death is just another part of Life on the farm. Over the last decade we have lost lambs, calves, barn cats, one beloved horse and two precious dogs. I wonder if they left anything behind that Fergus can smell. Perhaps not. He is ready to move on.

We follow the diagonal path that the cows’ hooves beat across the pasture, to the soy bean field at the top of the tractor lane. The tiniest rabbit prints I have ever seen – smaller than a kitten’s – have Fergus’ full attention now. But then he discovers a spot where someone ate some soy beans and lay down for a nap. And here is a corn cob that someone carried from the other field. Wild turkey tracks. Deer scratchings. Coyote scat. So many stories to tell. Ferg’s nose can read them all.

As we come to the end of the tractor lane, something darts into the bushes beside the creek. Was that a fisher? A coyote? Or was it a deer? The sight of the dog scares many animals away. I don’t want to encounter a coyote – it might try to attack my dog – but I would love to see a deer. I know they are there. And so does Fergus.
-30-