No arachnophobes in this house

When I travelled to Australia, I made the mistake of reading the Lonely Planet’s guide to the most poisonous animals on the continent. For the first week I had trouble venturing outside as a result – until someone told me that you are just as likely to find a funnel web spider or carpet snake inside as out. That information came in handy when I found out that the thumping in the wall behind my bed was actually a harmless carpet snake climbing up to the loft, where she would slither inside, coil herself around the rafter and spend the night.

It was also helpful to learn that the larger huntsman spiders tend to be harmless. There certainly were enough of them, in the garage and under the sun visor of our SUV, ready to pop out and surprise us at any moment (once our startled driver almost went off the road). I also met the shower spider when I was in Brisbane. When the power went out, I showered the sea salt off myself in virtual darkness. At first, I thought the fuzzy thing that had fallen onto my foot was a facecloth. Until it moved.

When I’m frightened, I go completely silent. I got out of the shower and without drying off, wrapped a towel around myself and opened the door to the kitchen. My host and his uncle were sitting there on the couch, drinking beer. “Did you meet Harry, then?” they asked.

That introduction to the wild world of arachnids was good practice for me, when I became a cottage owner. Otherwise, I might have been a bit put off when I realized a family of wolf spiders (cousins to the huntsman) had taken up residence in the closet. They introduced themselves one day when I was sitting at my desk, by skittering across my laptop keyboard. They made me jump, then they jumped themselves. They are actually kind of cute and they do eat other bugs (like the dreaded mosquito) – but I swept them outside anyway.

The other day I realized that there is a daddy longlegs on the ceiling above our shower. It seems to be catching ladybugs, so I let it remain. The ladybugs are terrible pests – I vacuum or wipe them off the window every day, but they still find their way into my bed – and my water bottle – most nights.

Then the Farmer pointed out that the daddy long legs has a wife. And she appears to be nesting. I don’t mind sharing my bathroom with one bug-eating spider, but I’m not sure I want a whole clutter in there, watching me shower. 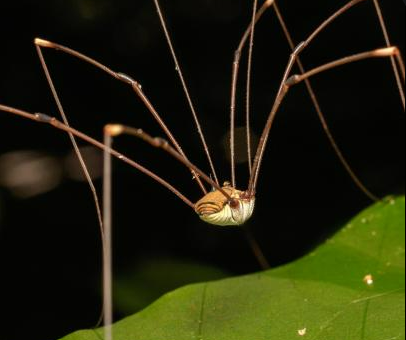 Posted by Diana Leeson Fisher at 10:54 AM