Springtime on the farm is good for the soul

My first lambing season on the farm was January of 2008. That was the same month that my father died, after a brief but intense bout of pancreatic cancer. The numbness that tends to plague many of us in the winter months was intensified for me because of this loss. I was also fairly overwhelmed with the emotional involvement of lambing – the adrenalin, the worry, and the sadness when a newborn doesn’t make it; the utter delight when you see one thriving and bounding around the pen like a springbok.

I barely remember that winter. It’s all a blur.

Springtime, however, was another story. After eight weeks, it was time to let the first lambs out onto the new green shoots of grass that were poking through the last few puddles of snow. We opened the doors to the pens, and the first of the brood poked their heads out into the aisle. Seeing an escape route, the rowdier ones pushed them on from behind. Soon everyone was at the door to the barn, waiting for me to open it. They poked their noses at the cracks in the door, the sunlight peeking through.

As I slid the door open, bright sunshine beamed in and blinded the lambs who were used to the filtered rays of the pen. They shook their tiny, bobbed tails and blinked. Then, one tentative hoof on the concrete ramp. Oh! It makes a tapping noise. Tap, tap, tap. She did a little dance and spun around. Her cousin followed. A tiny mosh pit of lambs was created on the ramp before the first ewe stepped out, stretched her neck up to the sun and gave them a good shove out of her way.

Once on the grass, the lambs seemed energized with a sudden high voltage. They sniffed, bleated, jumped and ran. Some, realizing they had lost their mothers on the outside of the pen, began to run around in circles, butting udders with their heads, in a desperate search for something familiar. They were repeatedly nudged away until, finally, they found the ewe that belonged to them.

The ones that had been on the bottle sometimes needed a top-up at the end of the day, when we brought them back inside. For the most part, though, they forgot all about me. Life was suddenly so much bigger than the soft hay in the lambing pen and the warm sweetness of milk.

Watching those lambs celebrating life helped me to remember that our difficult seasons come and go. Life is a cycle, and death is just one tiny part of it. 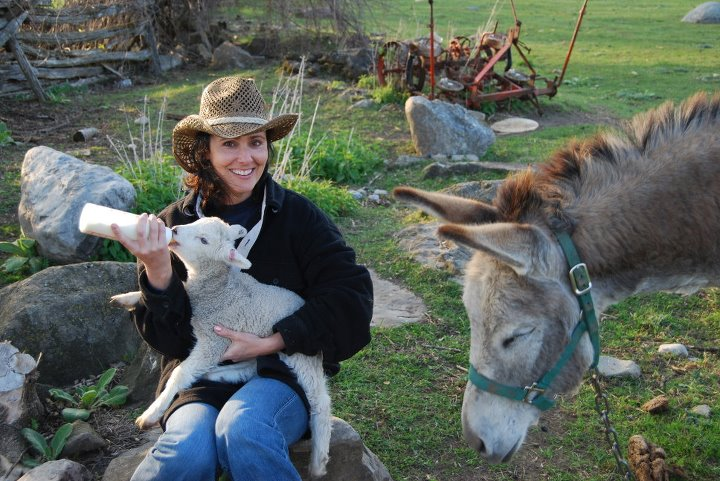 Posted by Diana Leeson Fisher at 11:47 AM

I really enjoyed your piece in the paper about donkey! My husband giggled as I read it to him. Well done!