My dad was a snappy dresser. He was the last generation of public-school teachers to wear a suit to work, every day. He never wore running shoes because he had no intention of running. His sweatpants never made it outside the house. He ironed his jeans. He wasn’t fond of jewellery, except for his thick gold wedding band, and a flat serpentine chain.

When my dad passed away in January 2008 after just four months of illness, we were all in shock and struggling to face a world without his huge presence in it. I decided to throw myself into a new challenge at work and found the learning curve quite steep. I needed quiet, so I could focus. Mom had gone to Florida with friends, and the house was empty. I packed a lunch and brought my work there. I spread my files out on the coffee table and opened up my laptop. I sat quietly on the couch and closed my eyes. The house hummed with the energy that our family had embedded in its walls over the previous twenty years. I felt a sense of total comfort and support, as if he was still there, sitting in his favourite armchair to my right, answering my questions and encouraging me. My mind was clear and the words came easily as my fingers flew across the keyboard. My focus on that first assignment was laser sharp. The work led me into a whole new path in my career. I doubled my salary overnight and began making what my writing was worth – for the first time in my life.

A year later I had taken on yet another challenge, as project manager on a documentary film project. It was completely out of my realm of professional experience, but I felt pushed and supported by the trust of the Indigenous group that had requested me on the assignment. As we packed our bags to head up to Northern Quebec, I realized I didn’t have a suitable jacket for the damp chill of springtime in the North. I borrowed one from my Mom.

As I walked out on the frozen Rupert River to assist our film crew on that chilly April morning, I slid my hand into the pocket of Mom’s coat. My fingers closed around something, and I pulled it out to take a closer look. I recognized it immediately as the gold chain that my father wore continually in summer. It had been polished to a shine by the leather of his tanned neck. I put it around my own, under my scarf. I felt him walking with me as I stepped out confidently onto the ice.

It took my mother a couple years until she was ready to bury my father’s ashes. His remains are on a soft hillside overlooking the creek in Oxford Mills. We have found deer prints there occasionally, near his headstone. He would like that. But I don’t feel his presence there, so I don’t visit the site often. I can’t visit the old house anymore either, as it has been sold and my mother has moved on. Now, when I want to feel close to my dad, I wear his gold chain.

I realize it would be unwise to form an attachment to this inanimate token of my father’s memory, because that would just lead to my losing it. I need to find other ways to keep his memory alive, before I forget the sound of his voice, the tilt of his smile, the touch of his hand and the glint in his blue-green eyes. 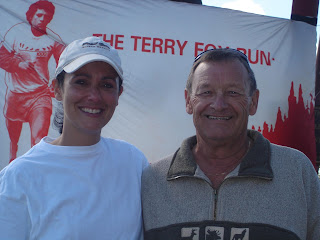 Posted by Diana Leeson Fisher at 5:51 AM