I'm not a doctor; I just write like one

I have kept a diary since I was a little girl. I filled one little hard-covered journal (the kind with the lock and key) every year. Mostly they were notes about what we ate, where we went, and then which boys I thought were cute, and plans for my clothes and hair and other such banalities. When I got married, I brought them with me in a suitcase of their own. As an adult, I continued to journal. I planned my perennial garden. I recorded my favourite bible verses (don’t laugh; I did. This one was particularly helpful to a 25-year-old mother of 3: Philippians 4:13). I developed a habit of burning those journals at the end of every year, as a therapeutic sort of exercise.

I started a new journal the day I married the Farmer, on August 25, 2007. Basically, I record the BIG events in the lives of our family members: births, deaths, engagements, marriages, new jobs, health concerns, etc.

I picked up my pen to record our youngest daughter’s engagement the other day and realized I have lost the physical ability to write. As a writer my typing skills are pretty strong, but I guess I haven’t been writing longhand for a while because my penmanship is absolute crap. I used to write all the time – in school, in long letters to pen pals – but when do I write these days? Grocery lists are about it.

Does anyone else have this problem or is it just me? I try to write, and my fingers fail me. I can’t seem to keep the cursive flowing. Good luck to anyone who finds this particular journal after I am gone. It appears to be filled with the style of hieroglyphic shorthand my mother used in the ‘70s.

I’m working on a novel – my first – and thought it might be nice to do the first draft in longhand, in a notebook. A favourite writer, Elizabeth Hay, told me that is the way she always begins a new book. The idea appealed to me because it meant I would be leaving something behind for my descendants, in my own hand. Now I see that hand is illegible.

I will go back to typing out my story on my laptop, disconnected from the Internet and its distractions (which was the secondary appeal of the notebook). I will continue to record family events in my journal, but I might switch to printing instead of cursive. I guess if you don’t use it, you lose it. If I feel the need to record something scandalous or salacious, I will do it in my busted-up handwriting, like a code that must be broken, to protect the innocent. 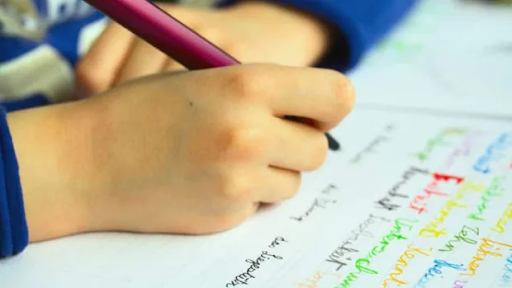