I went into the butcher shop on a Saturday and saw the sign on the Plexiglas that was protecting the cash during the pandemic. It said that the shop would be closing on January 23rd, forever. I asked the owner if he was planning an early retirement and he said it was just the right decision for him and his wife. The store was sold, but it would not be a meat shop again. As I drove away, I did the math and realized it was the end of a sixty-year business.

After I wrote a story about our life-sized dollhouse, Beverley Buckingham emailed and reminded me that she used to have one at her father’s butcher shop on County Road 18. Beverley was just nine years old when her parents built and opened the little shop that would be Buckingham’s Meats, in 1961. Her father, Hilton, had always been a butcher. He had been in charge of the meat department at Anderson’s on Prescott Street, Kemptville. Now home to a suite of apartments on the top, retail on the bottom, the entire three-story complex used to be a department store with men and women’s clothing and grocery.

When Hilton moved to work at the Creamery (now a condo building on Asa), customers used to rent space in the meat lockers for their own frozen goods. Everyone had a cold storage in their basement but no one had a freezer at home. Hilton’s clients were loyal, and followed him from one business to another. So it only made sense that he should just open up his own.

“It was a family business,” Beverley explained. Buckingham’s started as a custom butchering business, charging just 3 cents a pound. People could bring in their own meat and Hilton would cut it for them. His wife did the wrapping and the kids did the lettering.

After 3 or 4 years, customers started asking to have special orders brought in. Hilton made a deal with Schneider’s, and went into retail. His business grew, and an addition was built on the shop. The customer base grew, and Hilton aimed to please. One of Beverley’s favourite memories is of a woman who came in one Saturday morning, wielding a roasting pan.

“I need you to cut me a piece of meat to fit in this,” she said.

Meanwhile, in Brockville, young Albert Dyks was shuttling back and forth between the various IGA meat departments in the region. He worked all but Wednesday afternoon and Sundays, including a late shift on Friday and an early start on Saturday. He almost fell asleep at the wheel one day, prompting his wife Ina to suggest they move to Kemptville. The B&H offered him a fulltime gig in their meat department, which would become his post for the next 8 years.

In 1972, Albert bought the meat shop and the house from Hilton, who retired from the meat business to become the town building inspector. With three little kids at home, the youngest just 2 years old, Ina had her hands full.

“Albert said, it’s ok - I’ll run the shop myself. You can just help me on weekends,” Ina laughed. “That didn’t last long…”

Soon, everyone in the family was behind the meat counter. Ina started with very little knowledge of the business, and soon became very familiar with the different cuts of meat. She and Albert passed on their business knowledge to their 3 kids, who all worked at the shop part time.

Like many shops in the region, the retail business of Albert’s closed down for a week during hunting season, while they ran a business doing custom cuts for hunters. It was not Ina’s favourite time, and she may have been a bit relieved when new regulations came in restricting butchers from hanging wild game in the same cooler with other meats.

They also did custom cuts of farmed meat on their “day off” Mondays, but that too soon came to an end. Albert focused on supplying the same quality Buckingham’s was known for, and “Albert’s Meat Shop” gained a reputation for excellence that, along with his sparkling personality, had customers arriving from all over the region.

In 1988 the Dyks’ built a new building and expanded with new and used equipment. The shop thrived as a supplier of local and special order meats, and Albert’s developed a regular clientele. The town grew and new grocery stores popped up. It was difficult to compete with the larger chain stores, who could sell their meat at a loss just to get customers in the door. But you didn’t go to Albert’s to get the cheapest cut of meat.

In 2006, Mike and Susan Simpson approached Albert about buying the shop.

“There are no coincidences,” Ina says. “God had a hand in it.”

As they were already considering retirement, Albert and Ina agreed to sell. Once retired from the business that had consumed and enriched so much of their lives, they were able to enjoy their 50th wedding anniversary and a trip to Holland in 2013. Albert passed away suddenly in 2014, and the whole community mourned his loss.

Mike and Susan Simpson carried on the tradition of special orders and quality meats for their customers. It was no doubt a challenge to compete with the bigger grocery stores, especially during a pandemic. A focus on farm-to-table has had a resurgence, however, as even people from the city are starting to show more of an interest in where their food comes from.

From my own perspective, I know our family will really miss the special ham-on-the-bone that the Simpsons would order for us each Easter and Thanksgiving. When we heard they were closing, we ordered one so we could enjoy it one last time before we have to find another local source.

If you are considering opening a butcher shop or something like it, you might take your lead from one of our local long-time business professionals. You have to grow and change with the times, but you also have to know when it is time to step back and let someone else take over.

And to the Buckingham, Dyks and Simpson families, thank you! Your customers will miss you when we sit down to Sunday dinner. 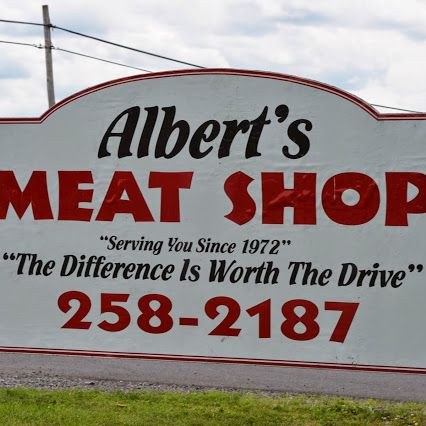 Posted by Diana Leeson Fisher at 9:39 AM